Home | About Us | About the Turtle

We Help Kids Come Out of Their Shells

At Swank Early Skills Development, we use the science of Applied Behavior Analysis to provide effective skills training and behavior intervention to support children and families in our community. Skills gaps or problematic behavior can put limitations on a child’s independence and ability to interact the way they want to.

We provide services to help kids build the skills they need to bust out of these limitations, come out of their shells, and let their light shine bright. Our goal is to help your child and your family develop the skills needed so they can live a fuller, more autonomous, and more enjoyable life.

The logo of Swank ESD is a turtle because we love turtles. Our owner has always been a fan of turtles. Turtle spotting and helping turtles off the road were things she has enjoyed as hobbies for a long time. When she met her husband, it turns out that was an interest they shared.

Over the years, turtles became a big part of their lives. They would go turtle spotting at ponds, lakes, and streams while out on walks, hikes, or travels. Thoughtful gifts were often turtle-themed and turtles ended up being a part of any traveling plans, including some visits to specific turtle rescues. They even released turtles back into their pond on their wedding day!

Giving a Home to Rescue Turtles

Turtles continued to be a regular part of our owner & her husband’s life and they were eventually able to adopt some rescue turtles of their own. The Humane League had a red-eared slider named Rocko that needed to be rehomed and she was the first turtle our owner adopted.

Even after adjusting to her new home, Rocko was still a little subdued. Our owner and her husband kept saying, “We need to get her a Buddy”. And, next thing you know, the Humane League had a turtle named “Buddy” who needed a home. With Buddy by her side, Rocko really came out of her shell to interact more, be more active, and she seems happier.

It Had to be a Turtle

With all of this history, it didn’t make sense for the Swank Early Skills Development logo to be anything else – it had to be a turtle!

If you have any concerns about your child’s development, problem behavior, or coping skills, you are not alone. Call 717-740-6161 Today. 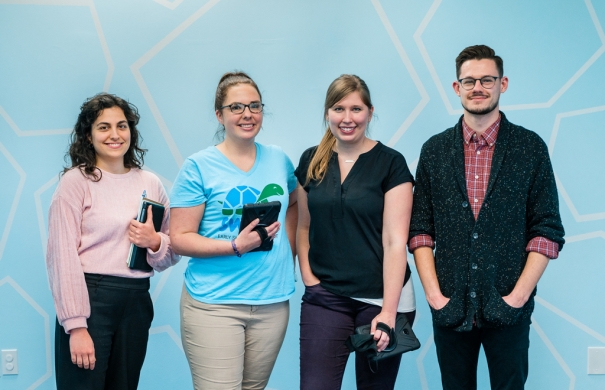