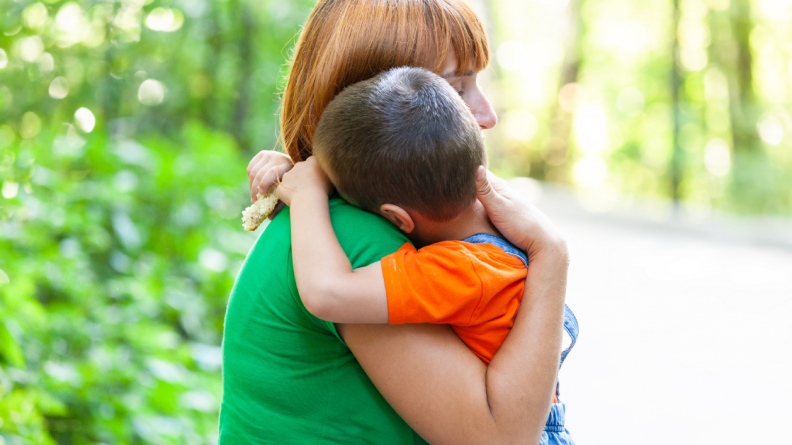 Milestones: Meet Liam, a 4-Year-Old Client Who Gave His Mother a Powerful Message After ABA Therapy

PLEASE NOTE: Names in this article have been changed to protect the identity of the client and his mother.

Megan began seeing what she believed were signs of autism in her son, Liam when he was about 12-months-old. By 18-months, Liam was diagnosed with autism and sensory processing disorder.

She remembers the desperation she felt at the time of his diagnosis.

“Liam was non-verbal,” Megan said. “He had five big meltdowns a day. I had no idea how to communicate with him or how to help him from having a meltdown. He’d scream and kick; I felt like there was nothing I could do to help him.”

Megan enrolled Liam in Birth to Three services with her local county to get some support. Through this once-weekly parent coaching model, Megan began to understand more about why Liam behaved the way he did and how to communicate with him more effectively. However, Liam was still having multiple big tantrums every day. Her Special Instructor from Birth to Three services told Megan about Intensive ABA Intervention and recommended this treatment for Liam. She referred Megan to Swank Early Skills Development.

Most problem behaviors are a sign of a skill deficit – often the inability to effectively communicate. This was true in Liam’s case. His inability to verbalize his wants, needs and feelings developed into high levels of frustration which led to his meltdowns.

Cindy and her team worked to provide Liam with the tools he needed to say simple sounds, slowly teaching him how to communicate verbally. Liam learned to ask for things and activities using vocal approximations, which are sounds that make up a word related to the desired item/activity that can be used in place of the adult form of the word until that is learned. After about a month of intensive, consistent ABA therapy, Megan noticed that the number of meltdowns started to go down.

“Liam started to figure out how to control his frustration and soothe himself during his first month of ABA intervention,” Megan said. “It was something his behavior therapist helped him learn to do and after about a month it just clicked. After that, he had fewer and fewer meltdowns. Eventually, his five meltdowns a day turned into about one a week.”

“Before he started ABA therapy, if Liam wanted a cup of milk, he’d throw his cup at me or throw it across the room and scream,” Megan said. “Now, he walks up to me, hands me his cup and waits for me to pour his milk.”

Liam’s doctors and other therapists also saw an improvement in his behavior. Overall, they noticed he was more interested in participating in his various therapies and more willing to work.

ABA Taught Liam How to Communicate His Thoughts. His First Phrase Was Powerful

Within a year of ABA intervention therapy with Swank, Liam went from a non-verbal three-year-old to speaking, counting, saying his ABC’s and mastering 80 words and some short phrases.

This year, Liam is working through his IU13 class virtually at home. Megan says that he’s much more willing and able to cooperate, saying that ABA has helped him put two and two together and recognize that when he does what he’s asked, good things happen.

Megan has also started to adopt some of the ABA techniques she’s seen that have helped Liam and uses them at home during mealtime.

“I’m working with Liam at home, trying to teach him how to use utensils,” Megan said. “I’ve turned it into a game. If Liam picks up his spoon and holds it, we play trucks together. I have a monster truck course set up with cardboard boxes practically throughout our entire house. He loves it and I can see it starting to work.”

Megan started keeping a journal after Liam was diagnosed. Whenever she reads back through the entries, she realizes how far Liam has come … and how different life was before Intensive ABA Intervention.

We’re so proud of Liam and the progress he’s made during his time with us and welcome you to explore the benefits that Intensive ABA Intervention can bring to your child’s development. Contact us today.